Finally I’ve been accepted into the Steam in home streaming beta. Couldn’t be any more excited! I guess the question you maybe asking right now is why am I so excited?

For a while now I’ve been looking for a good streaming solution to stream my games from my gaming rig to other devices in the house. I’ve used Splashtop,which is absolutely abysmal, and I’ve tried other non main stream options. When I read about Steams streaming option I got pretty excited and signed up for the beta immediately.

I’m going to be honest, I didn’t expect it to work, but to my surprise it does! I sat upstairs with my MacBook Pro Retina perched on my lap and clicked on the option to stream Skyrim, a fully modded version of it, and bam, it loaded and played as smoothly as if I were playing on my gaming rig.

I haven’t spent much time with the streaming service but I intend to have a real good play. Once I’ve had some more hands on time I’ll get an update out. Right now however I’m having a geek overload.

Below is a list of my top five favourite games that I played in 2013. Some of them really aren’t very conventional but I enjoyed all of them. There are links in each of the headings for more information on the games. Enjoy.

Before playing the latest Tomb Raider my commitment to single player gaming was pretty pitiful. I just couldn’t stick with any game for longer than a handful of hours and struggled to get all the way through. That changed with Tomb Raider.

The game was wonderful to play with an intruiging storyline and fantastic gameplay. At times the game grew repetitive but overall the story flowed well, leading me into some fantastic moments.

Throughout the game you get to guide Lara, watching her transform from a victim into a survivor. Its pretty intense stuff and definitely my top game.

Recently I rediscovered my love for Pokémon. I’d grown bored of the franchise, finding that the games had grown stale and repitive but with X and Y we are introduced to new mechanics and graphics.

The game is great fun and the new graphics make it interesting to explore. With a whole new host of monsters to collect and battle the game held my interest for a lot longer than I expected.

Pokemon Y far exceeded my expectations, shocking me with how well the updated graphics had been implemented. For anyone who was once a fan or just looking to pick up a new title for their Nintendo DS I would recommend giving this a go!

First person shooters tend to grow old fast when I’m behind the gun, especially if its a single player game. BioShock Infinite managed to stear clear of this trend, leading me from start to finish within a few days.

I loved the art style and setting. The world is so beautifully built and crafted by the developers and the story line is both touching and clever. Throughout the game I grew to care about the characters and I was genuinely interested in learning more about them.

The gameplay was often fast and furious, mixing gunplay and supernatural powers amazingly well which helped create some very unique and exciting battles. Swapping and changing your powers and loadouts really helped to add an extra layer to Bioshock.

Despite my ability to grow bored of the genre pretty quickly I absolutely loved Bioshock Infinite. Its worth diving in for so many reasons, story line, gameplay, there’s just so much to try.

I recently backed a game on Kickstarter that caught my eye. 7 Days to Die is a survival game where the world is fully customiseable. Basically its Minecraft and DayZ’s baby.

I’ve been giving the beta a whirl and have thoroughly enjoyed the game so far. Crafting my base from scavenged materials to fend off the hordes of the undead is just great fun. Mining deep into the earth to avoid detection from bandits, unbeatable.

This game has so much potential and I cannot wait to see how it turns out.

I’ll probably be hunted down for this one but I really enjoyed Resident Evil 6. No, its nowhere near as good as the original games but I loaded this up not expecting much and what I got was a whole load of chaotic fun.

The characters we know and love are back, stumbling through an interwoven and absurd storyline. They can move whiles shooting and survive the most outrageous moments. Through all of this however the game is fun.

Its not the survival horror that we are used to but its a good laugh. I recomend go into this with an open mind and you will more than likely have a pretty good time.

So I decided to delve into another one of Gameloft’s clones. They make some pretty good mobile games and Dungeon Hunter 4 is no different. It’s a great little game, packed filled with some brilliant RPG elements, fantastic graphics and great controls. The gameplay is fun, button mashing mayhem. I’ve sunk hours into hacking and slashing my way through hordes of enemies and upgrading my loot. For a mobile game this is pretty great fun.

This is something you will see a lot during the game

Where the fun stops however is Gamelofts insistence on in app purchases. Simple things like using potions more often than every couple of hours will end up costing you gems, and gems will cost you real world cash. In order to progress in the game you need better equipment and the quickest way to get your hands on this is to spend some gems on it. In fact pop up sales will appear in-between loading screens, enticing you to spend spend spend. Now, you can earn all the loot for free and upgrade gathered loot with in gold that you find in game. However this is a long process. I’ve already repeated one level about 20 times in order to grind my way to the higher level equipment.

At the end of the day this game is free to play and you’re not being forced to spend any money. However in app purchases pop up around every corner, leaving me wishing I could just pay for the app up front and have a better in game experience without being pestered every other minute.

I’d recommend giving this app a go if you fancy playing a premium RPG on your mobile device. It others some good old fashioned button mashing fun and is worth giving a chance. Just make sure you avoid the temptation to blow your real world cash on this game, it could turn into a real money pit. 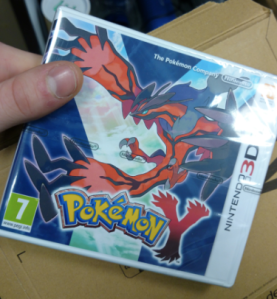 When I decided to give the Pokemon franchise another go my expectations weren’t particularly high. I remember the days of playing Pokemon Blue and how much fun that was, nothing would compare to that. So with that in mind I powered on the latest instalment, wary that any of the newer Pokemon games id played had grown old fast.

The first thing that shocked me was just how well the art style has transitioned across into a fully fledged 3D game. We are no longer playing a pixellated sprite game, everything about this looks great. Walking around the house you start up in just feels so much more immersive, it’s actually fun to take a look around and explore the building unlike previous generations where you are in a small boring room.

Theres a massive range of pokemon to catch and collect right at the beginning and almost immediately you pick up an exp share which shares out exp from a battle with your entire squad putting less pressure on you to choose who will be your lead pokemon.

So far the game really feels like something new unlike previous generations which have felt like the original game just with small tweaks. The world is fleshed out and due to the new art style and graphics its just great fun to explore. Theres a whole host of small tweaks but ill touch on those when I give a more detailed impression of the game.

So far ive sunk only a few hours in but for the first time since Blue I really cant wait to power the game back on and waste a good portion of my life playing.

Check it out at Pokemon Y