A Thousand Hearts (ATH) is my first project I am working on. It will be a series of books revolving around a sic-fi/super natural setting. The main character Michael Nolan is pulled into a world beyond his wildest dreams and finds himself in the middle of a war between darkness and light. The Angels, warriors of light and protectors of the world as we know it take Michael into The Guild and train him in their ways. Their Vampire allies Lesigne, are targeted by a mysterious Fallen Angel who causes an uprising and brings an end to years of peace throwing the supernatural world into a state of war which threatens to spill over into the modern day world, dragging it down into darkness. 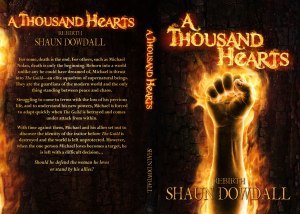 For some, death is the end. For others, such as Michael Nolan, death is only the beginning. Reborn into a world unlike any he could have dreamed of, Michael is thrust into The Guild—an elite squadron of supernatural beings. They are the guardians of the modern world and the only thing standing between peace and chaos.

Struggling to come to terms with the loss of his previous life, and to understand his new powers, Michael is forced to adapt quickly when The Guild is betrayed and comes under attack from within.

With time against them, Michael and his allies set out to discover the identity of the traitor before The Guild is destroyed and the world is left unprotected. However, when the one person Michael loves becomes a target, he is left with a difficult decision…

Should he defend the woman he loves or stand by his allies?

I’m currently working with a really talented up and coming artist called Rosie Munro. She’s been great at digging more information out of me regarding character description and has helped to keep me focused on this project. Check out the link to see some of her amazing work: